Offense swings in favour of Islanders, who net seven on Mooseheads 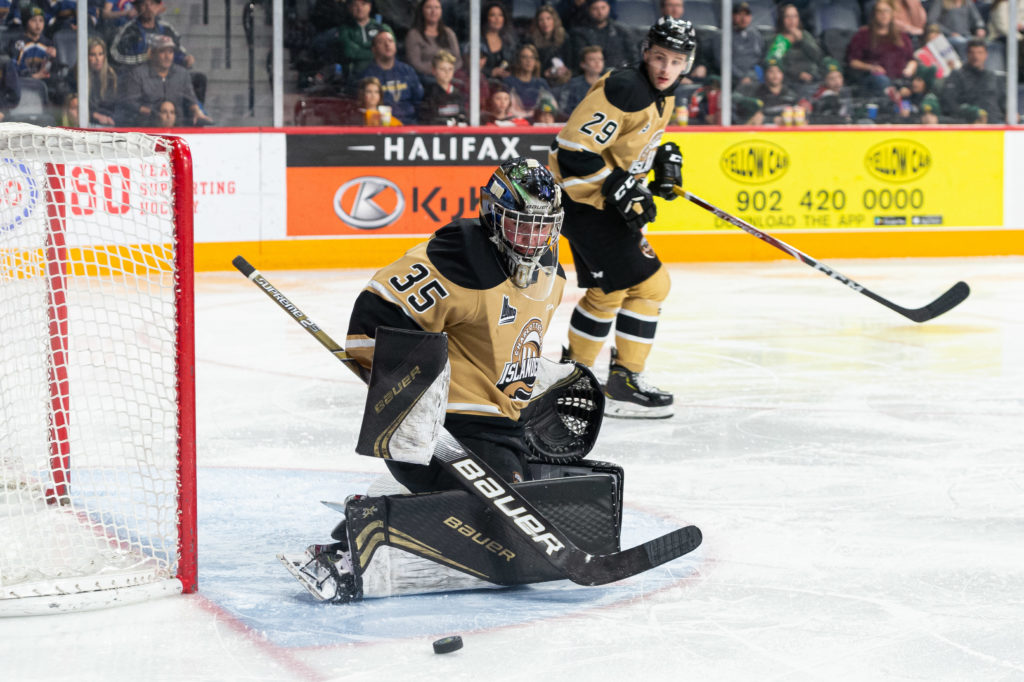 Just one day after giving up 8 goals to the Chicoutimi Sagueneens, the Islanders returned the favour to the Halifax Mooseheads. Brett Budgell led the offensive charge with three points including two goals, while Cole Edwards added two more of his own, and the Islanders beat up on the Mooseheads 7-2 to get back in the win column and end a 3-game losing streak.

“Today was a much-needed offensive breakout game for our team,” said Islanders head coach and GM Jim Hulton on the victory. “We had good legs and attacked with speed, which allowed us to generate a lot of Grade A scoring chances. All four lines contributed and Jacob Goobie was solid when tested.”

A team that has been snakebitten on the scoresheet the past two games, the Islanders appeared to employ a simple strategy for success: get more shots on goal. The strategy worked in the first period; Brett Budgell would receive a pass from Ethan Crossman in the high slot, and the Newfoundlander would work further in to the danger zone before snapping a wrister off of Mooseheads starter Cole McLaren’s shoulder and in to the net. For Budgell, that would be his 16th goal of the season.

The Islanders would continue the puck assault in the second period, firing eighteen shots on goal in the second alone that would result in two more goals. Cole Edwards would find the back of the net off a neatly-placed pass from Patrick Leblanc, and Max-Antoine Melançon would finish off a perfect passing play with Zac Beauregard and Drew Elliott, which gave the Isles a 3-1 lead heading in to the final frame.

Former Islander Kevin Gursoy would score against his former team to pull the Mooseheads within one but that was as close as they’d get. The Isles would explode for four unanswered goals in the third period, including second goals for both Brett Budgell and Cole Edwards, while Gaetan Jobin would score his first since his return from the World Junior Championships and Beauregard would add his fifth of the season, securing the victory for Charlottetown.

Jacob Goobie was solid between the pipes for Charlottetown, making 20 saves for the victory, his first in his hometown of Halifax. Brendon Clavelle would finish the game with three assists, joining Budgell, Edwards, Jobin, Melançon, Beauregard, and Ethan Crossman as players with multi-point games. William Trudeau, Drew Elliott, Patrick Leblanc, and Justin Gill would each tally solo assists.

The Islanders are back in action at home this weekend with back-to-back games against the Cape Breton Eagles on Friday and Saturday night. Stay locked to our social media channels for all the deals for this weekend in the coming days. Tickets are available at the Eastlink Centre box office, by phone at 902-629-6625, or online by clicking HERE.