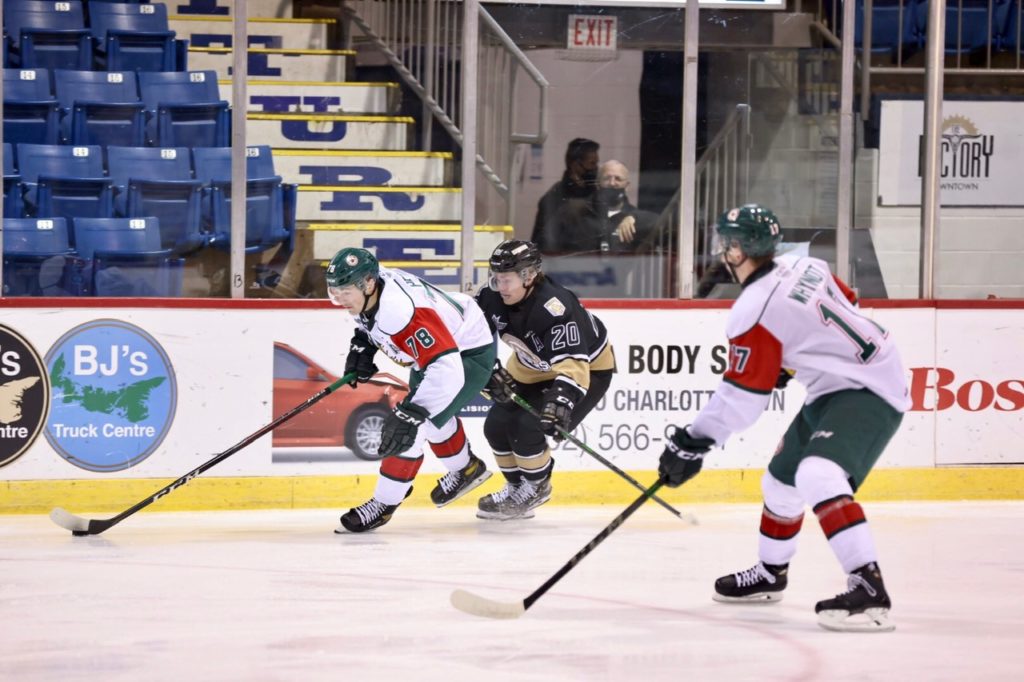 The Halifax Mooseheads tried for the same dramatics that happened the last time they played the Charlottetown Islanders. The Islanders wouldn’t let it happen again.

Oscar Plandowski scored his first career QMJHL goal while Cedric Desruisseaux scored twice, his 13th straight game with a goal which is one short of Sidney Crosby’s modern day record. He’d finish with a two goals and an assist as Charlottetown defeated Halifax 5-3 on Wednesday night.

“It was great to see. He’s been pressing a lot, and has had a lot of good looks,” said Islanders head coach Jim Hulton on Plandowski’s first goal. “We’ve been encouraging him to just shoot the darn puck. It was certainly great to see that smile on his face. The weight of the world is off his shoulders and I think you’ll really see him take off now.”

Plandowski was set up on the goal by William Trudeau with a great pass. He was instantly mobbed by his teammates, who may have been just as excited for the 17-year-old defender as he was.

“The boys were pretty pumped. I think they were waiting just as long as I was. They were part of this journey and it’s definitely unreal.” said Plandowski on the moment.”

The Halifax native added that he felt relief, having been pushing for this goal for over a season now.

“My confidence has taken some hits. I definitely heard from my friends not scoring last year so I wanted to try and get one early. Very happy to get it out of the way.” he explained.

Desruisseaux kicked off the scoring, wasting little time in continuing his historic goal-scoring streak. Just as he’s exiting the penalty box he jumps into the rush with Keiran Gallant on an odd-man rush. A quick back-and-forth play gives Desruisseaux a wide open net for his league-leading 18th goal on the season.

This streak has been unlike many before him; at 13 games, his goal streak stands alongside the likes of QMJHL greats Guy Lafleur and Pierre Turgeon. It’s something Desruisseaux says he isn’t taking for granted, and is just trying to enjoy.

“I’m just trying to enjoy the moment with the boys. I know it’s once in a lifetime, so I’m just going to enjoy it and have fun.” Desruisseaux explained. “Out there, I want to do good, but I’m more enjoying it than putting pressure on myself. I’m going to continue giving it my best and we’ll see what the future will bring.”

Markus Vidicek got the Mooseheads on the board in the second period before the Islanders restored the two goal lead, and then some. Desruisseaux capitalized on the powerplay midway through the period, snapping his trademark wrist shot from the high slot five-hole on Mooseheads starter Brady James. Captain Brett Budgell would follow up with a tally of his own, following a rebound off a Thomas Casey breakaway and going upstairs on James.

Halifax would make things interesting in the third, pulling back within two before the Islanders powerplay struck again. Just seconds into the man advantage, Casey would pounce on a rebound in front, causing a scramble and tucking it past James for his twelfth goal on the year.

Vidicek would get on the board once more before the end of the game but the Islanders would hold on, giving them their seventh straight victory at home, tying a franchise record in the process.

Desruisseaux and Casey would each finish with three points while Budgell and Noah Laaouan would each tally multi-point efforts. Trudeau, Gallant, and Sam Oliver would each pick up solo markers.

Despite the win, Hulton would add that he wasn’t thrilled with his team’s performance, saying that there was a lot more to not like. Specifically, he pointed to the team’s discipline once again; the Isles conceded eight powerplay opportunities to the Moose.

“I hope we’re not falling victim to our successes, but really I thought we were a veteran team that was just a little more experienced and found a way to win tonight. We weren’t the better team.”

The Islanders will waste little time getting back in action as the boys are on the ice Friday night here at the Eastlink Centre against the Saint John Sea Dogs. You can watch that game live at the Factory Downtown or Boston Pizza, or you can catch the audio broadcast on Fair Isle Ford Isles Radio!