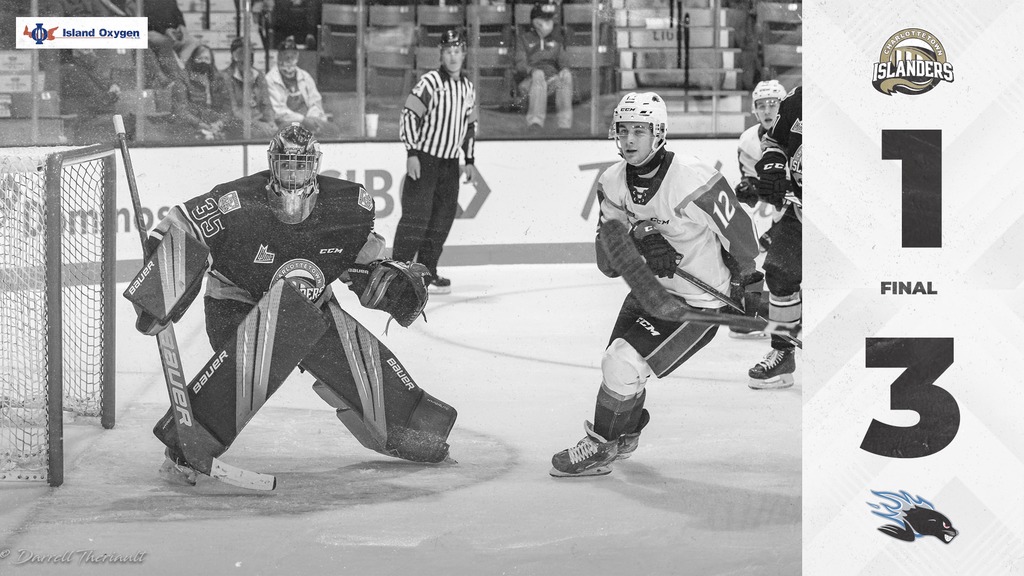 After taking both games during opening weekend, the Islanders are off to a confident start against Maritime Division rival the Saint John Sea Dogs. The Islanders were dominant in the first two meetings, outscoring the Sea Dogs 9-4. The 2022 Memorial Cup hosts stood eager to crack the win column on the young season heading to Charlottetown. While the Islanders were looking to bounce back from their first loss and return to their winning ways during Monday’s matinee. We were in store for a thriller here on Thanksgiving Monday.

The first period remained an idle one for scoring as Jonathan Lemieux stood tall against the Islanders stopping all 14 shots he faced in the frame. Jacob Goobie also looked confident in net, while only facing 5 shots, he played the puck very well managing the game as he could from the crease.

There were indeed some fireworks in the first period however as Isles Ben Boyd and Sea Dogs Cam MacDonald dropped the mitts just 5 minutes into the frame. The fighters got the job done though as it got both benches fired up and the fans roaring, setting the tone for the remainder of the game.

It was less than 30 seconds into the second frame when the Sea Dogs were able to sneak onto a 2-on-1 break and Riley Bezeau was able to clap one cross-crease and beat Goobie over the blocker shoulder. Assists on the goal went to Charles Savoie and Olivier Picard.

With the final buzzer about to sound off in the period, Jakub Brabenec found himself sneaking onto a breakaway. He was tripped up however and unable to get the shot off, good news came out of it though as he was awarded a penalty shot. Brabenec came in slow trying to wait out Lemieux, but the Saint John netminder stood tall giving Brabenec little room to work with shutting him down.

Shots following the second stood heavily in favor of the Islanders 30-14.

The Sea Dogs were able to add some breathing room before the halfway mark of the 3rd when William Dufour was able to turn and throw one on net, through traffic, it was able to beat Goobie. Brady Burns and Josh Lawrence each recorded an apple on the play in what would stand to be the game-winning goal.

The Isles weren’t going to go a full 120 minutes without putting the puck in the net and that’s where Michael Horth came in to play. Horth took a nice feed from Xavier Simoneau to snipe one over Lemieux’s glove-side shoulder in tight with just over 3 minutes left in the frame. Assists went to Simoneau and Noah Laaouan. This was as close as the Islanders managed to get though as Cam MacDonald added an empty-net insurance goal late to put the Sea Dogs up 3-1.

3-1 stood as the final tally in this one as Saint John finally got one into the win column. While this Monday matinee loss puts the Islanders on a two-game losing streak and drops their record to 3-2-0-0 on the young season.

Ben Boyd took home the third star of the game for his crowd-sparking fight in the first, Riley Bezeau received the second star recording his first goal of the season and Jonathan Lemieux was awarded the first star, stopping 38 of 39 shots.

39-24 stood as the final shots tally in favor of the Isles.