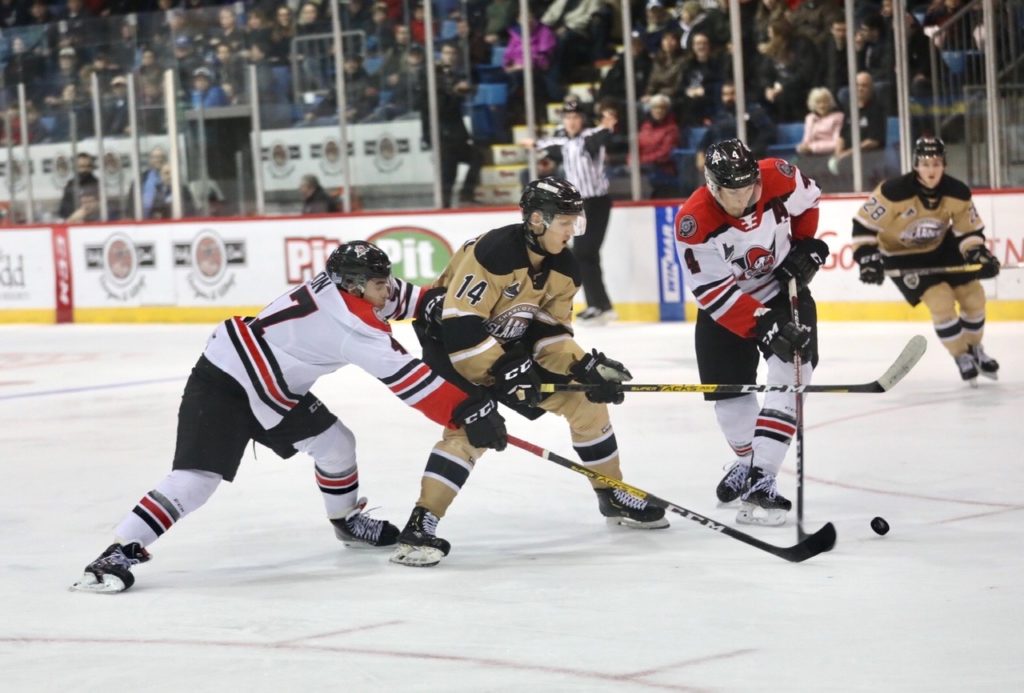 Forty minutes of solid hockey for the Charlottetown Islanders was spoiled on Thursday night after a less than stellar third period led to a 6-3 loss to the Drummondville Voltigeurs; the game was contested at the Eastlink Centre in Charlottetown, PEI in Quebec Major Junior Hockey League (QMJHL) regular season action.

Fresh off his appearance for Team Russia at the Canada/Russia series in Saint John and Moncton, New Brunswick, Nikita Alexandrov opened the scoring for the Islanders just 3:29 into the game; Zachary Beauregard and Kevin Gursoy picked up the assists.

Entering the game without their leading scorer, Dawson Mercer, who was sitting out the first of a six-game suspension, the Voltigeurs would have to rely on a new cast of goal scorers to lead the way on Thursday night. They would not wait long to make an impact, as Fabian Hochegger would tie the game at 5:11 for Drummondville; assists were credited to Jacob Dion and Édouard Charron.

Both teams would head to the locker rooms for the first intermission knotted at 1-1 with Drummondville outshooting the Isles, 8-6.

Nikita Alexandrov looked like a man on a mission on Thursday night as he put the Isles back up with his second of the night, and 14th of the season, at 7:42. Noah Laaouan and Matthew Welsh assisted the highlight reel goal.

The Islanders continued to press in the second period, their best period of the game.

With 2:10 remaining in the second it appeared that they would extend their lead to two-goals but Drummondville goaltender, Anthony Marrone had other plans, making a save of the year level glove save to keep the score at 2-1 for the Isles entering the second intermission. The Isles outshot the Voltigeurs in the second, taking a 15-11 shot advantage to the dressing room.

The Islanders’ performance in the final twenty minutes was a sharp contrast from their opening forty.

Xavier Simoneau scored his first of the game for Drummondville at 4:03 (assists to Fabian Hochegger and Nicholas Girouard) to tie the game at 2-2, before Orlando Mainolfi put Drummondville up 3-2 at 10:11.

Simoneau scored his second of the period less than two minutes later to extend the Voltigeurs lead to 4-2; Thimo Nickl and Thomas Pelletier were credited with assists.

With momentum heavily on the Drummondville side, Xavier Fortin (assists to Brendon Clavelle and Cédric Desruisseaux) would provide a spark to the Islanders

with 3:12 remaining when he cut the Voltigeurs lead to 4-3, bringing life to the 3,215 Islanders fans at the Eastlink Centre.

However, Drummondville would extinguish any chance of a comeback when they answered back just 25 seconds later with Nicholas Girouard scoring to return the two-goal lead to the the Voltigeurs. They would add an empty netter at 1:58 from Xavier Simoneau, completing the hat trick, giving Drummondville the 6-3 victory.

Charlottetown would outshoot the Voltigeurs in the game, 30-24 with Matthew Welsh stopping 18 of 23 shots faced for the Islanders in goal.

Each team went one-for-five on the power play, each taking 21 minutes in penalties.

With the win the Voltigeurs improve to 13-7-0, good for third in the QMJHL, while the Islanders fall to 11-5-3 and fifth in the standings.

The Islanders will refocus for their Saturday night meeting with the Cape Breton Eagles in Sydney, Nova Scotia at the Centre 200. The Eagles are 12-5-1 and in a tie for fifth place in the standings alongside the Isles and Rimouski Océanic. This game can be heard live on Saturday Night Hockey on Ocean 100.3.

The Isles next home game takes place on Monday, November 11 at 3pm when they host the Gatineau Olympiques at the Eastlink Centre in Charlottetown, in a very special, Remembrance Day game. Tickets are available now at https://boxoffice.eastlinkcentrepei.com