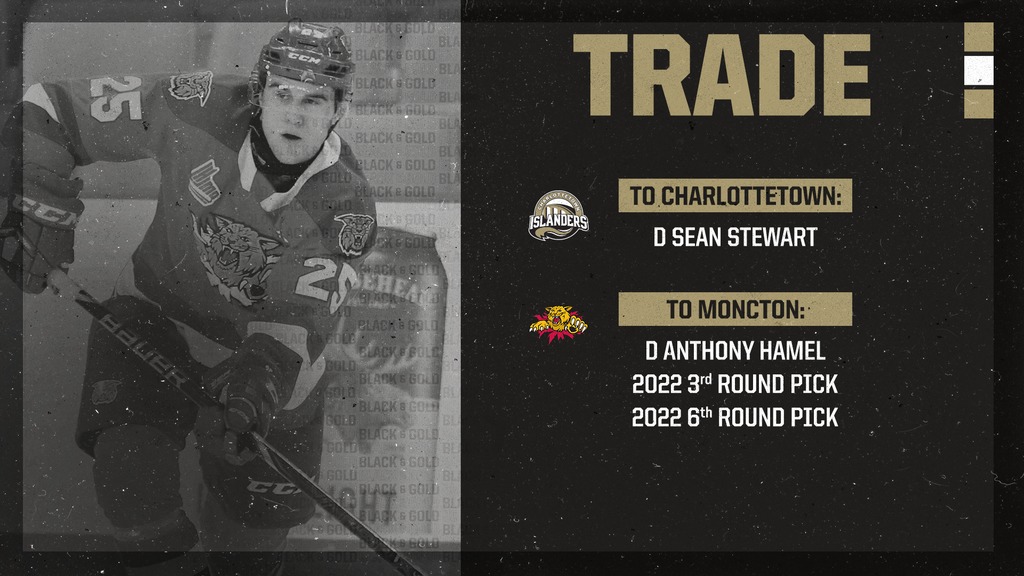 CHARLOTTETOWN, PE – Charlottetown Islanders head coach and general manager Jim Hulton announced on Sunday that the team has acquired veteran defenseman Sean Stewart from the Moncton Wildcats in exchange for defenseman Anthony Hamel, a 2022 3rd round pick, and a 2022 6th round pick.

“We are pleased to add Sean Stewart to our group today,” said Hulton on the acquisition. He is a veteran D who plays with grit and tenacity. He is well-known as a feisty competitor. Sean’s addition adds depth to our defense group and will improve many facets of our game.”

Stewart (2001-10-01) is in the midst of his third full year with the Wildcats. In 13 games this season, the Antigonish, Nova Scotia native has picked up a goal and three assists for four points and six penalty minutes. Known for his defensive ability, the 6’1 defender has amassed 125 career games for the Wildcats, recording four goals and twenty-one points in that time.

Stewart was originally selected by the Wildcats in the eleventh round, 194th overall, in the 2017 QMJHL Draft.

“I am extremely excited to get to Charlottetown and make a run at a championship this year.” Stewart said regarding the trade.

Hamel has played 54 career games for the Islanders, collecting six assists in that time, after being selected in the fourth round, 67th overall, by the Islanders in the 2018 QMJHL Draft.

“We wish to thank Anthony for his contributions to our team and community over the past year. He is a wonderful person and we wish him well in the future.” added Hulton.

QMJHL postpones games in the Maritimes Division
5 days ago