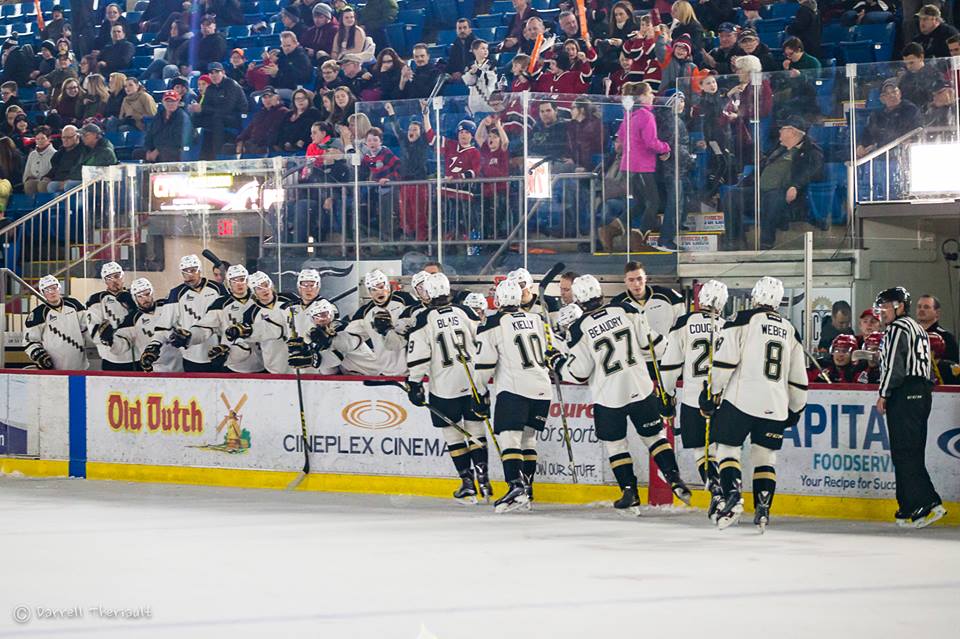 The Islanders have been getting some secondary scoring lately, and getting plenty of it.

The second line of Samuel Blais, Jake Coughler and Kameron Kielly combined for seven goals and 15 points in a pair of games over the weekend. Of the 11 goals scored by the team in those two games, at least one of those players contributed a point on every single one.

And it wasn’t just a one-time thing.

In the previous weekend’s games against Halifax and Cape Breton, the trio combined for four goals and 10 points.

“They’ve been absolutely terrific,” Head Coach Jim Hulton said of the line. “For me, the expression that comes to mind is they play the game the right way. They’re not cheating, they’re not gambling to create offence. They’re playing good, solid defence and as a result, producing offence.

“All three of them have played terrific.”

Blais was particularly hot this weekend, picking up a hat trick on Friday night and coming incredibly close to getting another on Saturday night as he netted another two.

“I play with good players on my line, so it’s easy for me,” he said after Friday’s game.

Since being acquired from the Victoriaville Tigres, the St Louis Blues prospect’s point-per-game average has increased even further, recording 12 goals and 19 assists for 31 points in 21 games with Charlottetown.

He started his stint with the Islanders on the top line alongside Filip Chlapik and Daniel Sprong, but being taken off that line obviously hasn’t done any harm.

“We have good chemistry,” Blais said of himself, Kielly, and Coughler. “We are three different players, so we just play hard and everything goes well.”

Kielly has been a staple on this team for the past three seasons. Averaging just under a point per game, he would be on pace for career-high offensive numbers had he not missed 20 games this year due to injury.

The Charlottetown native said he is enjoying the opportunity to play with some fresh faces after returning to action in mid-January, as Blais and Coughler were both acquired over the December trading period.

“We’re working hard, we’ve got chemistry coming, but we’re all buying into the system and I think that’s the main thing.”

Coughler, acquired from the Gatineau Olympiques for a fifth-round draft pick, has been a great pickup for the team.

In 28 games with Gatineau, Coughler recorded 12 points. In 17 games with the Islanders, he’s recorded 20 points.

He’s easily having the best offensive season of his career, and is just a couple of points shy of putting up more points with Charlottetown than he’s ever had in an entire season.

Coughler attributes much of that to the performance of his line.

“We read off each other really well, and it’s a real treat to play with players like that. They make the game so easy.

“We’ve been playing really well and we’re just looking to keep it going.”

Charlottetown has had no trouble scoring lately – with 26 goals scored in their last five games – and the Blais-Coughler-Kielly line has been a big piece of that. They’ll look to continue their top form when the Islanders take on the Blainville-Boisbriand Armada on Thursday night at the Eastlink Centre. Tickets are available at the Eastlink Centre Box Office, by phone at (902) 629-6625, or online at www.eastlinkcentrepei.ca.