Blais nets two as Isles get past Chicoutimi 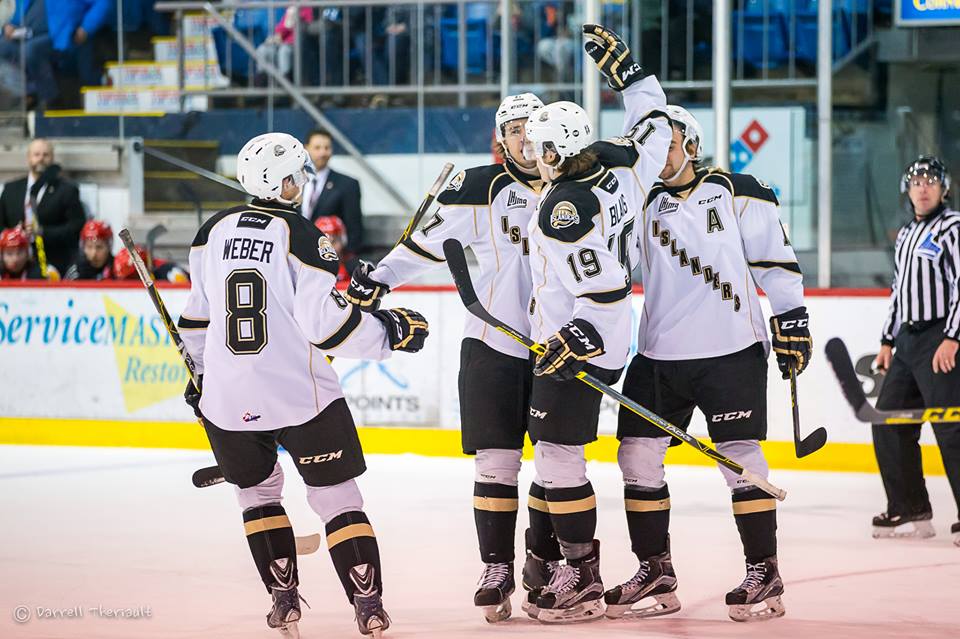 Samuel Blais had another two goals as the Charlottetown Islanders picked up a 6-4 win over the Chicoutimi Sagueneens on Saturday night at the Eastlink Centre.

With the win, the Islanders move into sole possession of 10th place in the standings.

Blais now has five goals in his last two games.

“I think I play with emotion and make the little details, and I think that’s why I played good this weekend,” he said.

The Sagueneens pulled back a couple of goals late in the second to make it a one-goal game, but Head Coach Jim Hulton was pleased with how his team played with the lead in the third.

“We’ve had a bit of a tough time with leads in the second half of the season. That’s the most calm, poised, and mature period we’ve played with the lead, so I’m very happy with how we played the third.”

One area that was particularly strong for the Islanders in the game was the power play, which went 4-for-6 on the night, including two on the same major power play.

“They were hungry,” said Hulton. “They were extremely aggressive right from the beginning and they were establishing the shot and bouncing on rebounds. The confidence is extremely high on that unit right now, so to be able to get a five minute major like we did is a big turning point in the game for us.”

“It’s chemistry,” said Oliver Cooper. “There’s some pretty skilled guys on that power play as well so it makes it pretty easy.”

The Isles got the ball rolling quickly as Samuel Blais launched a shot past Julio Billia just a minute into the game to give his team the lead.

Six minutes later, just after a penalty to Guillaume Beaudry had expired, Chicoutimi tied things up as Jake Smith redirected a shot from Artem Maltsev. But the Isles took the lead back not long after, with Kameron Kielly setting up a perfect one-time opportunity for Mitchell Balmas on the power play.

In the latter half of the frame, the Sagueneens got things even again as Dmitry Zhukenov grabbed a rebound in front of McDonald while on a two-man advantage.

The second period was full of power play goals, beginning with the Islanders gaining the lead as Blais sniped his second of the game into the back of the net with one second remaining on a penalty at the 6:46 mark.

A few minutes later, Elie Bérubé caught Bradley Kennedy in the head and was given a game misconduct and a five minute major penalty. The Islanders capitalized on the opportunity by scoring twice: Alexis Vanier ripped one home at 10:39, and then Daniel Sprong got one from the side of the net at 13:21.

“We scored two goals on (the penalty), so we were obviously pretty fired up about it,” said Cooper. “You never want to see that happen, but I guess it’s part of the game.”

The Sagueneens got themselves back in the contest before the period was over, though. Nicolas Roy had some help from a bounce in front of the net to make it 5-3, and then Jonathan Bourcier found a wide open net to make it a one-goal game with a minute and a half to go in the period.

The Islanders held on in the third period, and Jake Coughler topped it off with an empty net goal late in the game.

The Isles are back on home ice next week for their next game against the Blainville-Boisbriand Armada on Thursday night.