Isles advance to second round with 4-2 win 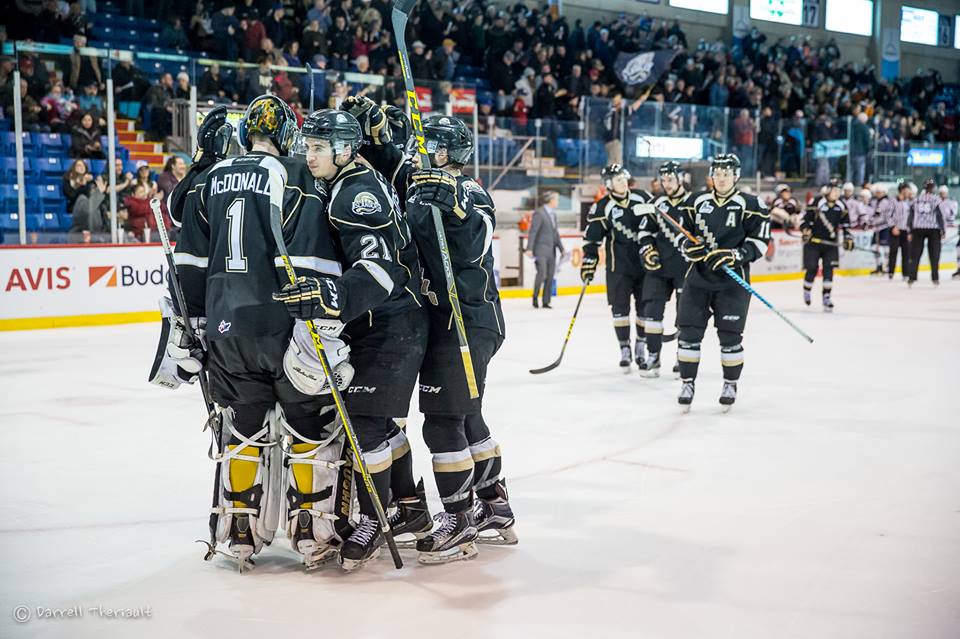 Daniel Sprong had a pair of goals, Mason McDonald made 41 saves and Mitchell Balmas had the game-winning goal as the Charlottetown Islanders advance to the second round of the QMJHL playoffs for just the third time in franchise history.

The Isles won Game 6 by a score of 4-2 in front of a rocking Eastlink Centre on Sunday night to win the series 4-2.

“We’re excited to get the first win out of the way,” said Balmas. “(It’s) good to win at home and (we’re) excited for the next one.”

Winning the game in six games on home ice also gives the team a bit of rest before the next round starts instead of having to make another trek up to Rimouski.

“We didn’t want to go back,” said McDonald. “It was already in our mindset that we weren’t gonna go back and we went out and did a good job.”

“They’re a good team at home and it’s a loud crowd,” said Sprong of not wanting to return to Rimouski. “Our fans were great tonight and we got the job done at home.”

Sprong got the scoring rolling less than two minutes into the game with help from a breakout pass from Luc Deschênes. Deschênes got the puck to Sprong to send him on the breakaway, and he launched the puck over the glove of Alexandre Lagacé.

Further scoring didn’t come until late in the second, when the Oceanic once again scored a pair of quick goals to make it a completely different game.

At 16:42, Dominic Cormier got a shot through traffic to tie things up, and then 77 seconds later, Antoine Dufort-Plante got a shot off that it looked like McDonald didn’t even see, giving Rimouski the lead.

“It was just two lucky bounces,” Sprong said of the Oceanic goals. “They had 32 shots during the first two periods. If you put 32 shots on net, one of them (is) going to go in.”

After allowing two late goals in the second, the Isles had to focus up to get back on track in the third.

“We had to regroup,” said Balmas. “Get back to our game, get pucks down low and (get) pucks and bodies to the net.”

The Islanders didn’t mess around in the third period and got straight to business with Samuel Blais tying the game off a pass from Sprong just 1:33 into the final frame.

A few minutes later in the period, with Samuel Laberge in the box for hooking, Mitchell Balmas ripped a quick shot that beat Lagacé and put his team back in front.

Sprong picked up his second of the game midway through the third to cement the Isles’ lead, taking a bad angle shot that hit the skate of Andrew Picco and went past Lagacé.

“Right now, going into game six, I’ll take any goal,” Sprong joked after the game, saying he feels he got his vibe back after struggling early in the series.

“I couldn’t score, like I said. It’s nice to get the slump over, but most importantly we got the win. When I wasn’t scoring, we were still winning games, so that’s a good sign.”

“He told me he was going to score in the third period,” said McDonald. “He came through.”

The Islanders threw everything they could at the empty net to try and add a final goal, but there was no need as they held on for the 4-2 victory in front of 2,851 cheering fans.

McDonald said the biggest key to the third period was doing what they’d been doing best all series.

“We just stuck to our game plan. We kept doing what gave us success in previous games and we took it to them.”

“I think we played every period well. Just because they scored two goals in the second, you can’t call it a bad period,” said Sprong. “We had a lot of chances but in the third, we mixed up the lines a bit and I think that threw them a bit off guard.”

The Islanders’ second round opponent will be determined by the result of the Cape Breton-Chicoutimi series. But in the meantime, they’ll get some good practice in to be ready for the second round.

“We’re gonna enjoy tonight, but tomorrow we’ve got to get back to work and prepare for Shawinigan or Saint John.”