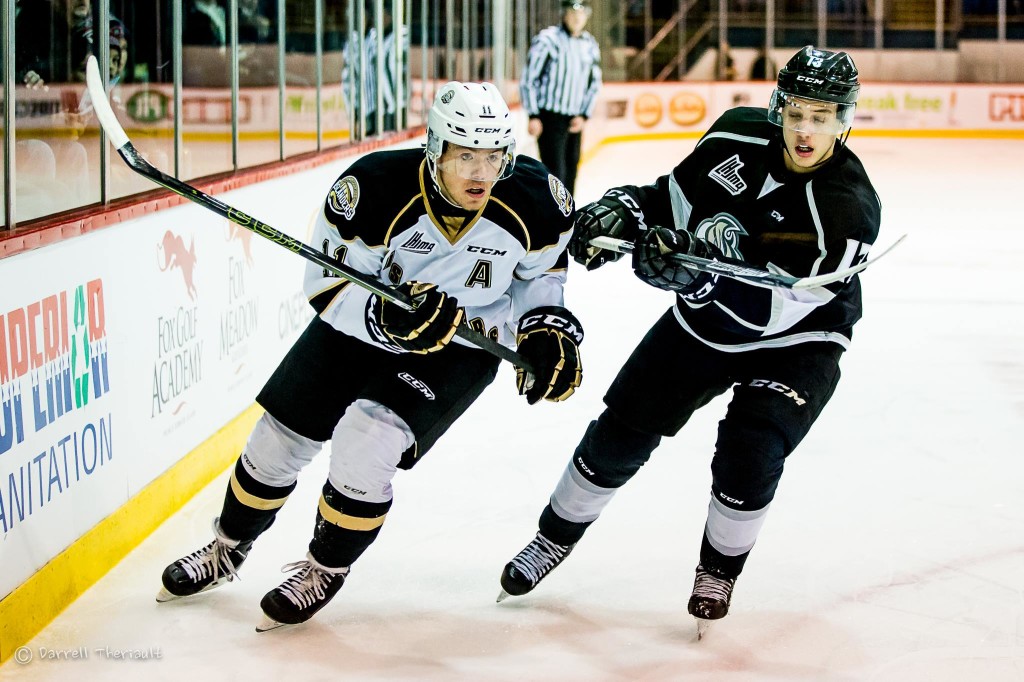 HALIFAX–It’s obvious the Charlottetown Islanders were excited about Daniel Sprong returning from the Pittsburgh Penguins. The night before his return to home ice, the team tweeted a photo of Sprong with the words “The Return,” stylized to allude to the Star Wars classic Return of the Jedi.

Yes, Star Wars mania has taken over the world the past few months, but this comparison makes sense. An astromech droid bearing the message “Help us, Sprong, you’re our only hope” may not have orchestrated Sprong’s assignment to junior, but the return couldn’t have come at a better time. The Islanders have struggled all season and need a player with Sprong’s goal-scoring ability to turn things around.

“If you look at the stats, we haven’t scored nearly enough goals this year. And that’s what Daniel likes to do, maybe as much as anybody else in the league,” says Islanders GM Grant Sonier. “His scoring has been desperately needed and we’re happy to have him.”

His presence was felt immediately. Sprong netted a pair of goals in his first game back, a 4–1 win over the ape Breton Screaming Eagles. He scored again the next game, and again the next and then potted a pair of goals in his fourth game. He’s put up points in every outing since returning—a total of 10 in seven games. Two of the goals have been game-winners, including an overtime goal against the Halifax Mooseheads.

And to put Charlottetown’s scoring woes into perspective, those six goals already have Sprong sixth on the team.

Sticking in the pros

Sprong’s journey in the NHL began in June when the Pittsburgh Penguins selected him in the second round (46th overall) after a 39-goal sophomore campaign with the Islanders. The six-foot, 180-lb. winger made the Pens out of training camp, no small feat for an 18-year-old. When the 10-game mark rolled around, he stuck in the pros, burning the first year of his entry-level contract.

Sprong was a regular in the lineup—scoring a pair of goals—until the end of November when he was a healthy scratch for eight consecutive games. He played a few more times in December before being assigned to the QMJHL on Dec. 19.

Sprong used his time in the press box to observe the professional game from a different angle, learning the finer details and how much time you have to make a decision in certain situations.

“When you’re watching two of the best players in the world from on top, you learn a lot quicker,” says Sprong of Sidney Crosby and Evgeni Malkin. “Everyone really helped in different ways in different areas. They answered my questions. They saw little things in my game they thought I did good or bad.”

Now that he’s back in the “Q”, he’s determined to build off his time in Pittsburgh and keep developing.

“When I got sent down, I knew I wanted to have a good start,” says Sprong. “[But] that’s not the most important thing to me—it’s to be a leader on this team and play the right way. For me, I want to prove that I can be that player in the future in the NHL.”

It’s no secret goals have been hard to come by this season for Charlottetown. With just 124, only Blainville-Boisbriand (98) and Baie-Comeau (86) have scored fewer. Sprong’s return instantly changes the scoring picture for the Islanders, though, and influenced how Sonier approached the trade deadline last week.

“If Daniel didn’t come back, we’d have to try and fill that hole,” says Sonier. “Kudos to him for making the NHL for as long he did. Having him back gives us new life and a new idea of what we think we can do.”

Instead of bringing in a big-time goal scorer, Sonier added extra support by bringing in Victoriaville Tigre Samuel Blais, who had more points than anybody else on the Islanders when joining the team. They also brought in San Jose Sharks defensive prospect Alexis Vanier and a couple other support pieces.

Underwhelming the first half

Charlottetown is 14th in league standings with 37 points and a 16-21-3-2 record. Last season, The Islanders finished ninth and won a playoff round for the first time since 2004. With many of the team’s best players returning, however, building off last season’s momentum has been a struggle.

“I don’t think we’re a team that’s ranked in the right spot. I think a lot of people are underestimating how good of a hockey team we are,” says Sprong. “We had a lot of key pieces missing at the beginning of the year and some struggles. But I really think we could win the Quebec league. We have the team to do it.”

Getting Filip Chlapik back should help. He’s gearing up to make his return to the Islanders after spending the past month in Helsinki while representing the Czech Republic at the world juniors. Chlapik has 23 points in 26 games, a dip in production from his rookie year last season when he had 75 points in 64 games. The rookie season led to him going 48th overall to the Ottawa Senators, two slots after Sprong.

“I can’t wait to get Chlapik back,” says Sprong. “We click with each other on and off the ice. He plays a certain style that fits my style and the other way around. He likes to slow the game down and is a very good passer. I like to slow it down, but I can also speed it up and use my shot. We both love to play a give-and-go game.”

Another player they need a strong performance from in the second half is goaltender Mason McDonald. The Calgary Flames prospect was given a rest after returning from playing for Canada at the world juniors, which gave him a chance to watch Sprong from in the stands.

“He brings a lot of scoring for us, and that’s what we need. He brings back leadership and experience from the NHL,” says McDonald. “You can tell he’s played in the NHL just by watching a period here. He looks bigger and better, and I’ve heard his shot got better. That’s a good thing.”

“NHL written all over him”

The Charlottetown Islanders communicate with the Pittsburgh Penguins so they can help Sprong work on specific goals. Pens assistant GM Bill Guerin and player development coach Mark Recchi have been the main points of contact.

“They’ve both been very clear to Daniel. We’re going to preach those things while we get Daniel to play hockey for us,” says Sonier. “We all know Daniel has NHL written all over him, but there’s a lot to learn even though he was there as long as he was. His 200-foot game is important to Pittsburgh so that is something we’ll work on.”