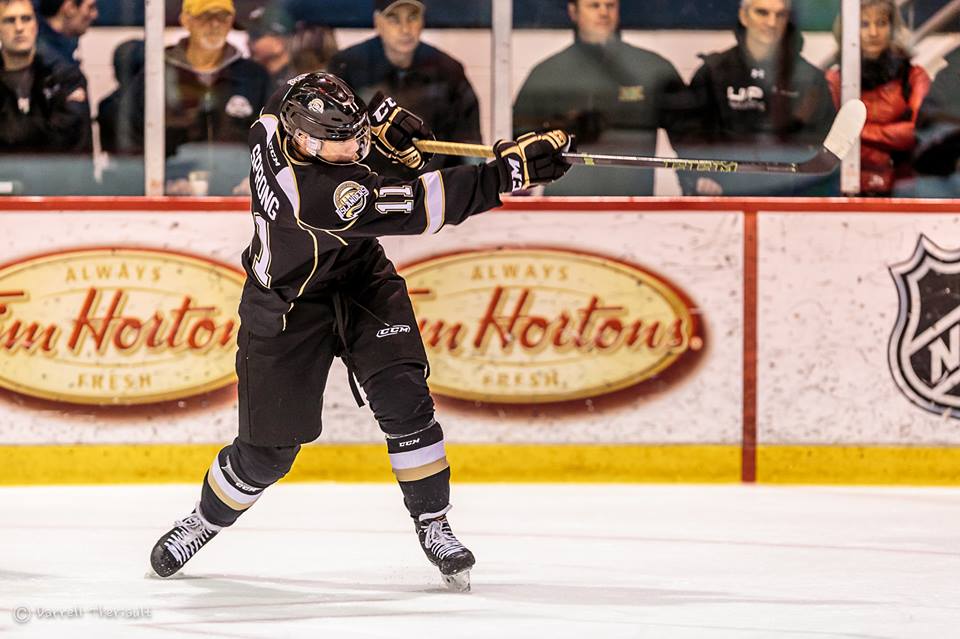 The Charlottetown Islanders were like two different teams in the first and second half of the season.

One key addition at Christmas may just be what helped the team turned their season around.

Daniel Sprong was one of five players missing from the Islanders’ lineup at the start of the season as he attended an NHL training camp. But unlike the other four, he didn’t return.

Sprong made the Pittsburgh Penguins’ opening night lineup out of training camp and appeared in 18 NHL games before being returned to the QMJHL on December 19.

But by that point, the Islanders had already played half their season with a notable hole in the lineup.

“Because of the uncertainty with his time in Pittsburgh, it was hard to move on,” said Head Coach Jim Hulton. “We knew until a certain point there was still a possibility he’d come back so it always felt like there was something hanging over the team.”

Without last season’s leading scorer on the roster, the Islanders had a disappointing first half, posting a 13-19-2-1 record at the start of the Christmas break.

But despite a frustrating first half, Hulton was convinced the team could turn things around in the second half of the season.

“It’s been a frustrating first half but the optimist in me says we’ve still got half a season left. There’s all kinds of scripts still to be written,” he said at the time, almost as if he knew what was coming.

The day after the Islanders closed out the first half with a 6-1 loss, the Penguins announced they would be returning Sprong to junior. When the team returned to action at the end of December, he had a clear impact.

“I can remember our first game back in Cape Breton, there was a buzz and excitement and an energy level that I hadn’t seen in our dressing room,” said Hulton. “That’s directly attributed to him.”

He scored a pair of goals in his first game back to lead the team to victory in Cape Breton and then went on to have points in his first 11 games. In 29 games played so far, he has scored 15 goals – six of which have been game winners.

There was mixed emotions for Sprong as he returned from the NHL, but ultimately he was happy to be reunited with his Islanders teammates.

“The guys welcomed me with open arms and I’m happy to be back in P.E.I.”

And while it’s no secret that Sprong can carry a team on his shoulders with his offensive talent, he’s spent the second half of the season trying to improve his play away from the puck, too.

“I think he’s very diligent in trying to address the areas he now knows have to improve in order to play in the NHL, which is his ultimate goal,” said Hulton.

“He’s so gifted with the puck that it’s easy to point fingers at his defensive play. But improving your play away from the puck is a mandate for any young player, that’s just a natural progression.”

Sprong says he’s happy with his play in the second half, developing different skills to make sure he spends next season on the Penguins roster, too.

“I try to be a leader on this team. I learned a lot up there in Pittsburgh and for me it’s just about developing the right way to be an NHL player full-time.”